Review- Halfway to the Grave by Jeanine Frost

*THIS IS AN ADULT READ. I REPEAT, THIS IS A STEAMY, ADULT READ* (Tasteful kind of steamy ;) )
Hallo readers, you can view the synopsis for Halfway to the Grave (Book 1 in The Night Huntress Series) by Jeanine Frost by clicking the title (via Goodreads). 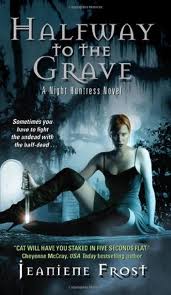 *Whistles the very beginning of this tune* (Just the very beginning) Bones… Bones, Dem’ Bones.
I tell ya, Karen (@teamsheltie, blogger of For What It’sWorth), Janette (@jderucki) and Jen (@jenduffey, blogger of What’s on theBookshelf) weren’t lying when they said I’d swoon over Bones and this awesome book. It was a story full of vengeance, love, and sacrifices.
Cat was different- had abilities no other human had. She was half dead and a bastard child of a vampire who had raped her mortal mother. She seeked retribution on her dead-beat (pun intented) father and her distaste for vampires; hence the reason she became a vampire hunter. This chick was kick-ass and I loved her feisty attitude.
On Cat’s mission, she tried to pick up on the wrong vamp. This one had a mysterious factor to him. Before she could stake him, she was captured by him and forced to make a deal. She hadn’t suspected she’d fall for him during the process.
Oh Bones… how you make me squirm, you… you, you chiseled, fierce, luminous, intoxicating, brow-arching bloke. And your filth talk, have mercy on my soul! Just, just… whew lawdy, dem’ Bones. He was English, and the author, Jeanine Frost had his accent and dialogue spot on. I couldn’t help but read his voice out loud in my best English accent.
The connection that Cat and Bones shared totally buzzed me. It was like a plug to a socket; so much electricity. So much passion. Their bickering gave me the giggles, but this line I totally digged- “Still, I had loved and been loved in return, and there was nothing greater than that.”
With a great, sexy, thrilling story line, perfect characters, and paranormal settings, Halfway to the Grave made an awesome adult read. I give it a balance between 4 and 5 stars… 4.5 brow-arching stars.
Kimberly
Posted by Kimberly Callegan at 1:17 PM