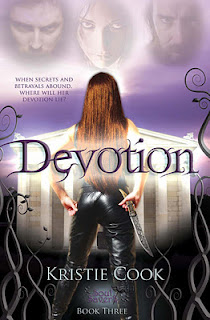 
With powerful abilities gained from the Ang’dora and Tristan back by her side, Alexis thinks she’s ready for the next challenge—protecting her son from what appears to be the inevitable. But she has so much to learn about her powers, her new world and the people in it. Nothing is what it seems to be on the surface, including the Amadis. Having believed the secret society to be definitively good and righteous, she discovers she couldn’t have been more wrong.

Power-hungry politicians comprise the council and make impossible demands. A traitor lurks among them all, inciting trouble that could destroy the Amadis and, ultimately, humanity. The Daemoni wreak havoc in the human world, with the ultimatum that they’ll continue attacking innocents until Alexis and Tristan are expelled from the Amadis’ protection. The couple’s own society begins to shut them out. But that’s not all.

There’s a secret. A big one. And faith and hope in Alexis and Tristan will be restored if she can uncover the truth in time.

But the search for answers leads only to the discovery of more betrayals by those closest to Alexis. Her devotion is put to the test—devotion to her husband, to her family, to her people and to her beliefs—leaving her to question whom she’s fighting for and why she should even bother. But if she won’t fight … who will?


Nothing and no one is safe from corruption and discord, not even the Angel’s Council or the perfect couple.  Alexis finally gets to see the Amadis Council in action and the harsh truth that nothing is sacred or as it seems takes a devastating toll in the most fast-paced, action-packed Soul Savers novel yet!


I absolutely loved Devotion. The Soul Savers novels just keep getting better and I never wanted to put this one down. The stakes are higher, the conflict is greater, and every single relationship, be it friendship, romantic, or business, is at risk of unraveling. Tristan and Alexis’s relationship is tested to its limits and the devotion and strength shown by both is amazing. And little Dorian is coming into his own as well. We finally get a glimpse at the dynamics among the Amadis within the council, towns and colonies, and even a coven and a werewolf pack! While people and groups fall apart and fight one another, tons of fabulous new characters, big and small, are introduced. Some mysteries are solved while others are revealed, maybe the biggest secret of all, and the devotion of everyone is tested to the max.


Is there a breaking point even for the angelic Amadis? Find out in the best Soul Savers novel yet, Devotion.