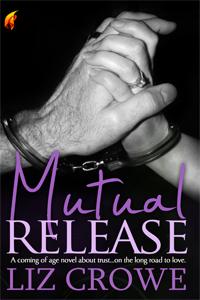 Mutual Release
Stewart Realty Book 7
By: Liz Crowe
Published by: Tri Destiny Publishing
Pub Date: April 2, 2013
Source: Tri Destiny Publishing in exchange for an honest review.
**WARNING: THIS IS AN ADULT NOVEL. Recommended for 18+ only. This title contains mature themes, explicit language, and sexual scenes that are not suitable for everyone.

Can two dark souls ever make a light?

As president of her own distribution company, Julie Dawson has all she ever wanted -- money, power, and respect. But her carefully crafted façade conceals a torment of abuse and helplessness. After years remaining emotionally aloof, she is finally independent, but alone. Because she refuses to rely on anyone but herself ever again.
Evan Adams is no stranger to success, or personal demons. The horrific trauma that destroyed his twin sister, and tore his family apart, forced him to craft a new life from the ashes of the old. He's content enough, focusing ahead and not dwelling on his murky past. But something important is missing. He knows what that thing is but refuses to acknowledge it.

A coming of age novel about trust...on the long road to love.

Review:
Wow! That's about all I could get out when I finished this book. Mutual Release was an emotional roller coaster I wouldn't mind riding again and again. It really is a "coming of age novel."  I think I experienced every single emotion known to man plus some while reading all about Evan and Julie's pasts. As I read, I literally got to watch each of them grow both on their own and then together. Seriously, I laughed, cried, and at times shouted (much to my husband’s bewilderment) at both Evan and Julie.