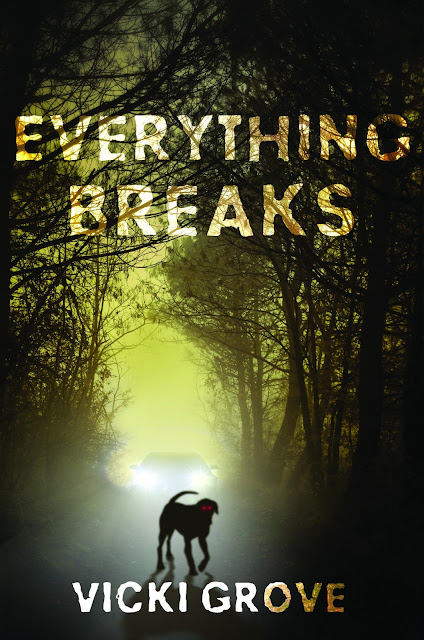 Everything Breaks
by Vicki Grove


Tucker was supposed to be the designated driver. But there was something about the beauty of that last true summer night, that made him want to feel out-of-control just once. He drank so much and so quickly that he was instantly sick. That left Trey to drive. "I'll catch up to you later," were the last words Tucker would ever say to his friends as he heaved by the side of the road. It was the last time Tucker would ever see them alive. Tucker’s grief and guilt are just about unbearable and he wonders how he can continue living himself. When he meets the Ferryman who carries souls of the newly deceased across the rivers that divide the world of the living from the world of the dead, Tucker gets a chance to decide: live or die. The temptation to join his three best friends on the other side may be too much for Tucker to overcome.

A gripping, haunting and emotional read.

There was a lot more that I wanted to tell her, like that everything in this beautiful treasure house of a world breaks, and sometimes things break so bad, all you can do is hope to get your heart to stop bleeding long enough for you to sift through the ashes so you can try to gain some slight understanding. But some things that break real bad can be mended if you’re lucky enough to have someone on your side with a ton of glue who won’t give up.

*****
And now, an interview with the author, Vicki Grover!

Vicki: Wow, I hate to give you such a lame answer, Britney, but I guess I read too many great authors to single out anybody.   I read YA and adult stuff and the books of my writer buddies, all of whom are marvels of nature.  I like meaty books that concentrate most on characterization.  Here's something I've noticed lately~ when I'm struggling with something, I pick out books written on that subject.  Fiction, not self-help books.  Everything I know about life I've learned through voraciously reading fiction, which is why I love the name of your blog so much.

B: Do you have a favorite time/place/method of writing?

V: I live deep in the Ozark woods.  You have to go to a lot of trouble to live clear out here.  For instance, the steep gravel roads ruin your car, you're a good half hour from the nearest town, the internet connection is iffy, and there are snakes galore.  On the good side, it's gorgeous, and exciting in the quietly mysterious way of all natural places.   I love to write on the banks of our big creek, or down at our pond.   I'm not afraid of being alone, and quiet.  Noise is a deal-breaker for me.  I love to write early in the morning.  The main thing for me is to write for at least a few hours every day.  But of course a part of your mind is always on your writing, swirling it around.  I'm thinking very seriously of going back to a #2 pencil for my first drafts.   Sometimes I think computer is too fast, faster than my thoughts.  Sometimes I wonder if cursive isn't a sort of magical match for the speed of your brain.

B: Can you tell us a little about what we expect from the story?

V: This is my first full-out supernatural book, though I did put a ghost boy in an attic once in a book called Rimwalkers.   When I was a kid I was addicted to Twilight Zone on television, and later I wrote a story or two for Twilight Zone Magazine.  I think of Everything Breaks as a sort of TZ-ish story.   It starts out with four seventeen-year-old boys in Oklahoma, going to the last bonfire of the season.  Spirits are high, drinking starts, and driving over a bluff to reach the lake, the car leaves the road on a switch-back curve and crashes on the beach far below.  Just before this, one of the boys has dived from the car to throw up in the ditch.  He, Tucker, survives to tell the story, but he's in horrible shape, physically, mentally, and emotionally.   Guilt and longing for the past are eating him alive, literally.  And then one night he picks up a hitchhiker, or rather she gets into his car, uninvited.  She looks like a scrawny little blue-haired teenager with bitten-to-the-quick purple fingernails, but looks can be deceiving.  She's actually the Ferryman who carries the souls of the newly deceased across the rivers that divide the world of the living from the world of the dead.  From her point of view, he's now in her vehicle, having called her to come with his own dwindling life force.  And now Tucker will have to figure out fast whether he wants to fight to live or yield to the intense longing he feels to join his friends on the other side.   The dog on the cover of the book is Cerberus, better known to the Ferrygirl, Charon, as Cherry Berry.   I was flattered when my editor called this, "A gripping, haunting and emotional read."   I hope it is, and wanted it to be.

B: Can you tell us a little more about the characters in EVERYTHING BREAKS? Any interesting tidbits?

V:  I almost always start my novels with some resonant memory that hounds me and wants to be explored.  When I was a senior in high school, three boys went off a bluff road in a 1967 cherry red Mustang convertible.  There was a triple closed-casket funeral, then one of the boy's mothers insisted on opening her son's casket because we seniors were getting into the drama of the thing too much, making it a movie of the week.  So my four boys are from memory, with embellishments and imaginary traits that fit the plot and made them contrastive.  The horrible trick of a writer is to make you love people that you're going to lose, so I hope the boys are attractive in their different ways. The step-grandfather in the story is based on my dad, who died a couple of years ago.  This may sound weird, but I think I wrote this book through grief, to figure out what you can keep in the face of death's finality.  It helped, as all writing (and reading!) helps to clarify this messy and beautiful thing called life.

And last but not least… if you could take ANY fictional character on ANY vacation for a week without any limitations, who would you take and where?

V: Well, I guess I would take Huck Finn, or I'd get him to take me, and we'd go down the Mississippi on his beloved and shabby raft.   And then some Missouri evening when the sky is such that you can't tell it from the water we'd slip right between those two elements and sail on eternally, with, yes, a book forever in our hands!

Thanks so much for sharing with us Vicki!

a Rafflecopter giveaway
Posted by Bwyatt at 12:30 AM