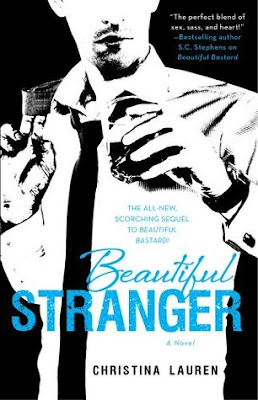 A charming British Playboy. A girl determined to finally live. And a secret liaison revealed in all too vivid color. Book two in the NYT Bestselling series. Escaping a cheating ex, finance whiz Sara Dillon's moved to New York City and is looking for excitement without a lot of strings attached. So meeting the irresistible, sexy Brit at a dance club should have meant nothing more than a night's fun. But the manner--and speed--with which he melts her inhibitions turns him from a one-time hookup and into her Beautiful Stranger.The whole city knows Max Stella loves women, not that he's ever found one he particularly wants to keep around. Despite pulling in plenty with his Wall Street bad boy charm, it's not until Sara--and the wild photos she lets him take of her--that he starts wondering if there's someone for him outside of the bedroom.Hooking up in places where anybody could catch them, the only thing scarier for Sara than getting caught in public is having Max get too close in private.

Wow, what a perfect follow up to the amazing Beautiful Bastard! The authors did a great job of keeping the feel of Beautiful Bastard without making Beautiful Stranger a re-telling of Chloe and Bennett's story. You could tell how much the authors loved writing Max and Sara, and thank the Lord they gave them their own story! I was a little worried we might get the same story with a different location and characters. You know, kind of like watching The Hangover 2. I hate feeling like I'm re-reading the same story with different characters.

But I sooo should have known better than to expect that from this fabulous author duo! They did such an amazing job with Beautiful Bastard, that I don't know how I ever could have worried about Beautiful Stranger. The only similarities were, well, it involves sex and a love story. Both very good things! But Max and Sara completely hold there own.

Max is like none other! He's tall and British... which in itself is amazing, but he's also kind and honest and attentive. His attention to every little detail is heartwarming and he puts his heart right out there.

Sara is interesting too. She's not a Chloe, all hard and confident. She's sort of soft and fragile, despite her adventurous streak that she explores with Max. Don't get me wrong, she not weak, not at all. She's just been hurt and while I expected the love story to go one way... well it surprised me and took a different turn. Lets just say, sometimes even the strong get hurt.

You definitely want to check out this fabulous sequel! And if by some crazy chance you have read Beautiful Bastard yet, go on and climb on the band wagon... NOW! You don't want to miss these contemporary love stories!


My review of Beautiful Bastard
Posted by Bwyatt at 12:30 AM